Daniel Rudge had been the landlord of the Tiger's Head public house in Wolverhampton. His close friend was Henry Clarke, who started a wagon wheel building business and then ran the Cogent Cycle Co. Daniel was interested in racing, and with Henry's help he began to build his own racing machines at 19 Church Street, Wolverhampton, which included an improved form of wheel bearing. Many people wanted his bicycles, and in 1870 he started building and selling racing machines. He made many improvements to his bicycles and they soon became the best racing machines that were available at the time.

He started to take part in the races that were held in the grounds of the Molineux Hotel, Wolverhampton. He won the very first cycle race to be held there in 1869, and was very successful. He started producing high wheelers in 1874 and, for a short while in the late 1870's, Dan was producing Humber bicycles for Marriott and Cooper after they had parted company with Humber, although they had the use of the name. In 1878 he was awarded a gold medal for his exhibit at the London Cycle Show. Dan Rudge died on 26 June 1880, having formed the Rudge business, and his widow continued to run it until November 1880 when it was sold to George Woodcock and amalgamated with the bankrupt business of Haynes & Jefferis to form the Tangent and Coventry
Tricycle Company.

Woodcock had also purchased the assets of the collapsed Haynes & Jefferis firm in 1879 and relocated the combined business to Ariel Works, Trafalgar Street, Coventry in 1880 having taken over the business of the Tangent and Coventry Tricycle Company. In 1885 the business was transferred into a private limited company called D. Rudge & Co. Ltd. It became the Rudge Cycle Co Ltd, Coventry, on 21 October, 1887, a public company with capital of £200,000. Walter Philips was the renowned works manager and Lawson, H. J., the sales manager. Stoddard & Lovering of Boston, Mass. were the US agents.

Maker of the Ariel, Emperor, Mechanic's, Rudge's Swiftsure and Tangent high wheelers. The No.2 Ordinary was one of the best known competitive machines of its era which pioneered adjustable ball races on wheels and pedals. Other competitive features pioneered by the company were hollow backbones and lighter tangentially spoked wheels.

Although Rudge took over manufacture of the Coventry Rotary from Starley & Sutton from 1885, the name Coventry Rotary was retained through to 1892 in Rudge catalogues, when production ceased. The Triplet Tandem Quadricycle Direct Steering Roadster was produced from 1888.

The Royal Crescent tricycle was made for about three years from 1886. It was introduced in Roadster, Ladies and Racer forms. Also the Royal Crescent tandem tricycle. A Parcels Carrier and Parcels Express were made before 1892 as well as the Roadsculler and Triplet. The Rudge cross-frame safety was patented in 1887 and sold as the Rocket. By 1889 the company was making safety bicycles with diamond pattern frames but with halved tubes for lightness named the Bicyclette. The company produced the Déesse brand for sale in France. In 1894 it built the Giraffe safety, along with Starley, J. K. & Co., under licence from Humber & Co. Ltd.

In May 1891 George Woodcock died. This coincided with a reduction in trade. The company was rescued by the Whitworth Cycle Co. in 1894 to form Rudge Whitworth Ltd.

A little-known fact (that ties in with the history of Cyclemaster) is that after Rudge Whitworth fell on hard times in the Great Depression, the music company EMI bought the Rudge name. EMI produced bicycles under the Rudge name from 1935 until 1943 when they sold the name to Raleigh.

In 1938 EMI centralized production in Hayes: Rudge's Coventry factory closed and re-opened next to EMI. 1939 saw the prestigious Rudge name associated for the first time with a motorized bicycle - the 98cc Rudge Autocycle. It was short-lived though: the Rudge factory was taken over by EMI for the manufacture of radar equipment during the War, and the remaining autocycles were passed on to the Norman company.

In 1929 Graham Walker won the Ulster Grand Prix averaging over 80 mph. This prompted the release of the Rudge Ulster, as well as a JAP engined 250 cc and parallel 4 valve 350 cc. The Ulster was one of their most famous models.

Rudge bikes finished first, second and third at the 1930 Junior TT using prototype radial 350 cc 4 valve engines. They also took first and second in the Senior TT. The road bike engines were changed to dry sump lubrication. The JAP 250 and the parallel four valve 350 cc ended production in this year.

In 1931 Rudge released its first 250 cc and 350 cc road machines with the radial valve layout. TT Replicas were available in 350 cc and 500 cc. The parallel valve 500 cc was also available in Special and Ulster models, the Ulster now having a 100 mph guarantee. First and second were taken in the 1931 Lightweight TT, and in 1932, second and third.
A radial head 500 cc was produced for 1932 only. A 250 cc TT Replica was built, and the road bikes were fitted with proper oil bath primary chains, and a stand that could be operated "with just one finger".
With the depression biting, 1933 was the last year of production for dirt track bikes, and the TT Replicas. The Ulster 500 cc was fitted with a "semi-radial" (parallel valves with radial ports) cast iron head. For 1934 the Ulster had its head cast in aluminium bronze, and a radial 4 valve 250 cc Sports was released. Rudge motorcycles took the first three places in the

A two valve 250 cc was produced in 1935, and in 1936 the last of the radial 4 valve 250 cc model were produced, while round tube forks were introduced on other models. In 1937 the valve gear became fully enclosed on the 500 cc models, but finances were bad and Rudge was bought by EMI, and production was interrupted, being moved to Hayes, Hillingdon in Middlesex.

A 250 cc 2 valve Sports was released in 1938, and for early 1939 the Ulster had an RR50 aluminium cylinder head. Production ceased in December 1939 in order to convert to radar production for the war effort.

Today, the Rudge is a sought after collector's motorcycle.

Rudge motorcycles were produced from 1911 to 1946. The firm was known for its innovations in engine and transmission design, and its racing successes. Their sales motto was "Rudge it, do not trudge it."

1909 They started selling re-badged Werner motorcycles in 1909 and manufactured their own machines in 1911.

1910 The company moved to the world of power. They developed a prototype with a 3.5hp, overhead inlet-valve engine. The biggest difference, in comparison with other manufacturers, was a one-piece fork shackle that enclosed the single-spring assembly. They retained that design feature throughout their years of production.

1911 Rudge announced a variable gear in which both engine and rear-wheel pulley flanges were moved.

1912 The variable gear appeared on a model that was to be known as the Rudge 'Multi', which remained on their list for a decade.

1913 Little altered but a new model with a 749cc engine was produced. It was designed to take a sidecar and was available with the clutch or the 'Multi' gear.

1915 Three models were listed, but the firm turned to war work and the production of motorcycles ceased.

1919 Production restarted and they built the 499cc single in three forms, the 749cc single and also a V-twin - all with the 'Multi' belt drive.

1923 A new four-speed gearbox was introduced and this would soon bring an end to the twin and the 'Multi'.

1924 Trade had dwindled so the Rudge engine was revised.

1925 The range was available in 346cc and 499cc models. The 499cc was also available as a Sports version. They all had four speeds with coupled front and rear brakes - both operated by the foot pedal. The 346cc was soon found to be lacking in performance and was dropped.

1928 Rudge started using drum brakes. These were particularly necessary for sidecar use and even more so if the new Rudge caravan was towed. Saddle tanks also appeared that year; as did a new Speedway model for dirt-track racing.

1929 Following success at the Ulster Grand Prix, the all-new Rudge 'Ulster' was launched. Also listed were the 'Special' and 'Dirt Track' models.

1930 Rudge started using dry-sump lubrication. The firm had its most successful year at the TT, following the development of a four-valve cylinder head with radially disposed valves and six rockers. They took the first three places in the Junior and first and second in the Senior.

1931 The depression years meant that the firm were unable to profit from their previous TT wins as their sports models were expensive, although they managed a win in the TT Lightweight. They began to sell their engines, usually given the name of Python, to other firms - in direct competition with JAP.

1932-1934 The TT brought them seconds and thirds. Several models had minor revisions and modifications.

1935 Financial difficulties had set in; at the end of the year they went into liquidation and were eventually bought by EMI who continued their production.

1937 Production was moved to the EMI plant at Hayes in Middlesex.

1939 Manufacturing ceased. This was because the factory space was needed for radar equipment.

1940 An autocycle appeared and although it originated from the Hayes plant, it was later made in Kent by Norman.

1943 Raleigh bought the whole of the issued share capital of Rudge-Whitworth Ltd, after which the name was used on a bicycle range for some time. 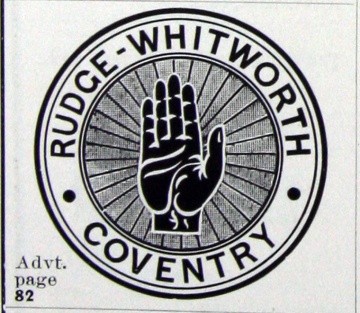 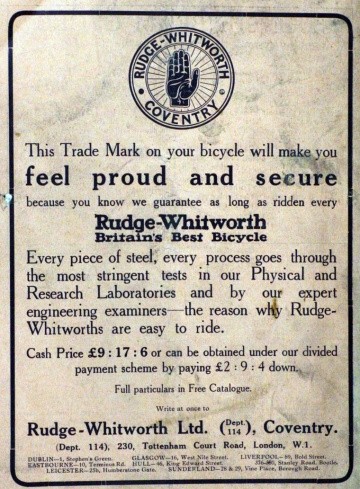 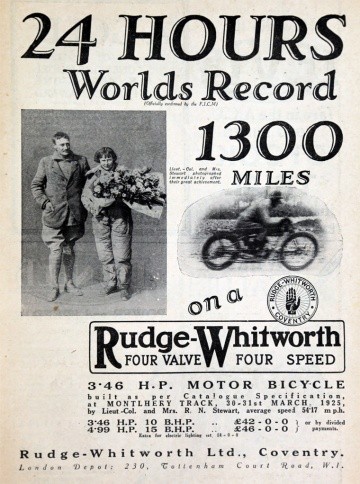 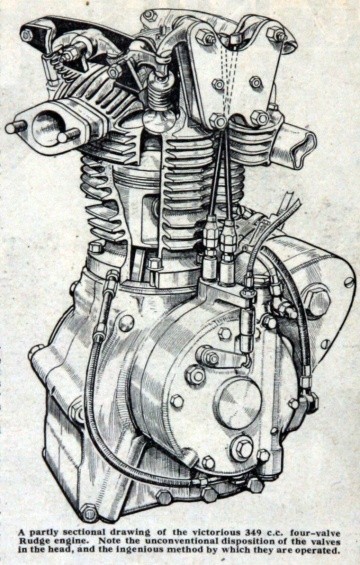 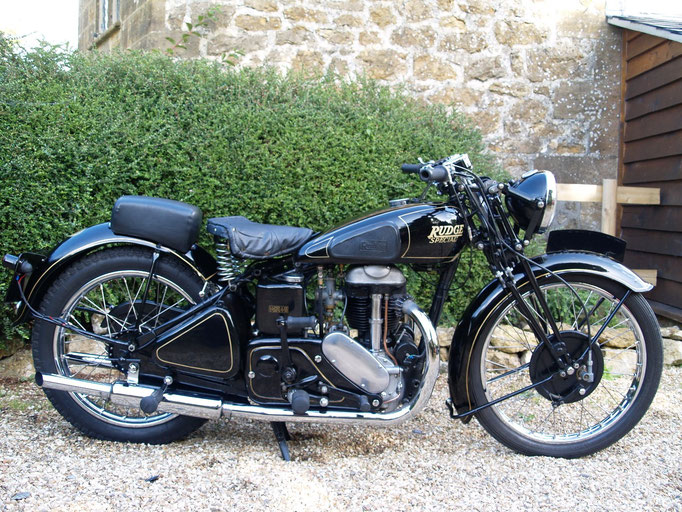 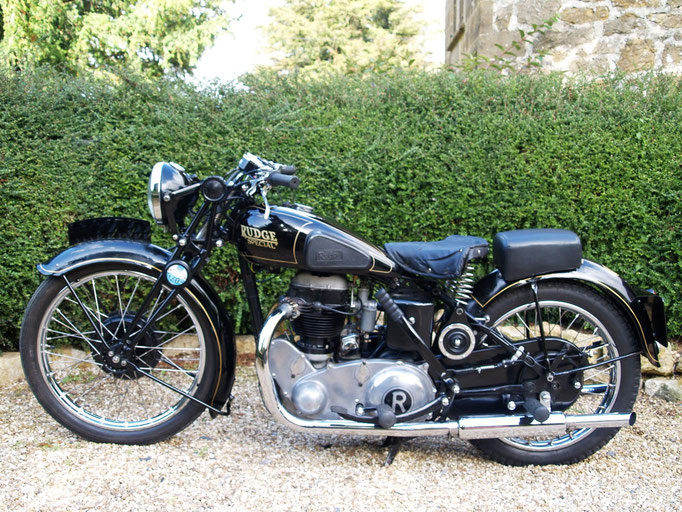 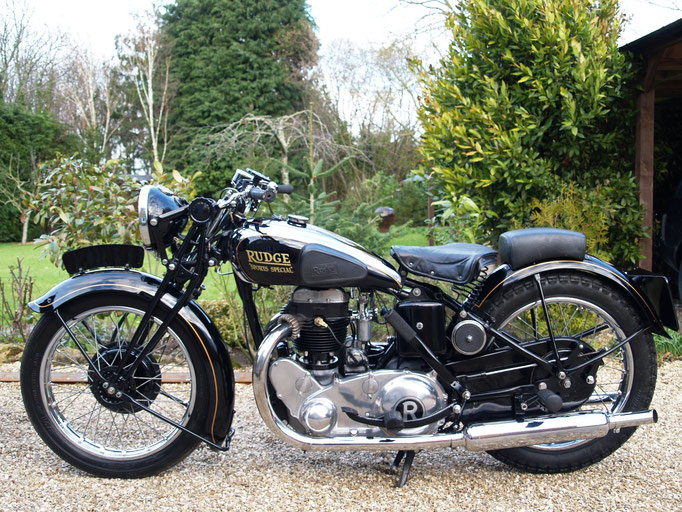 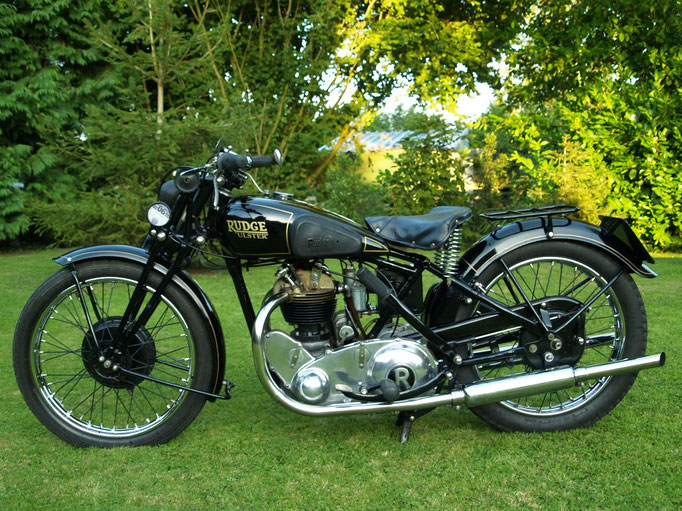 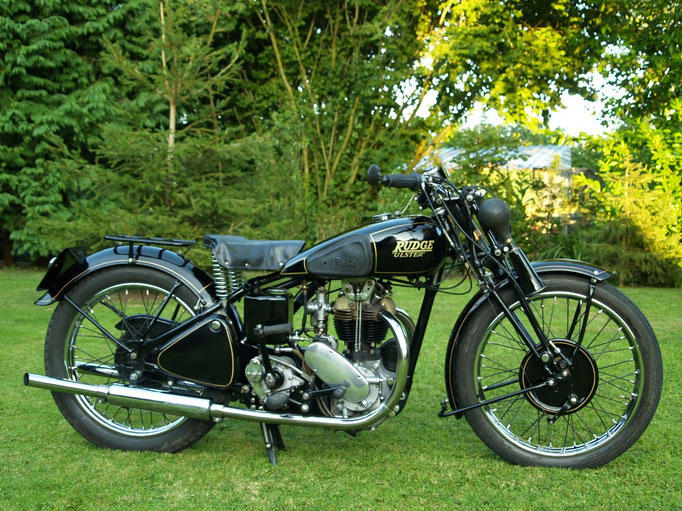 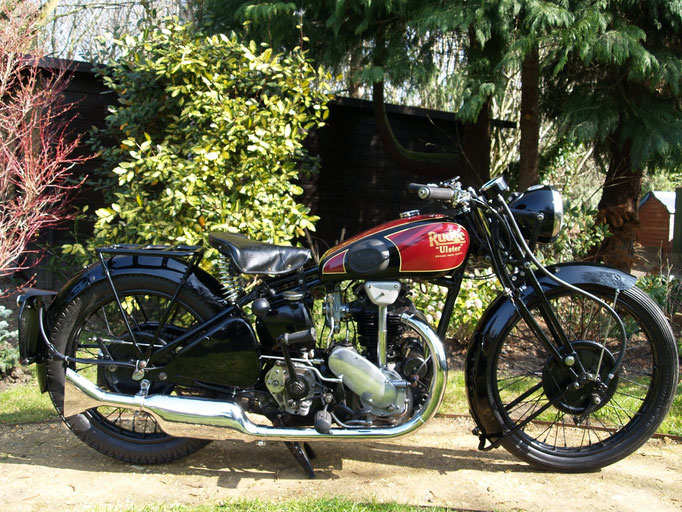 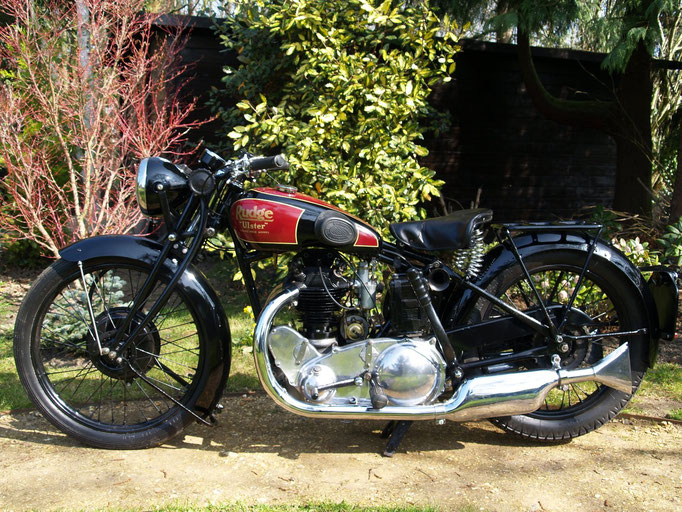 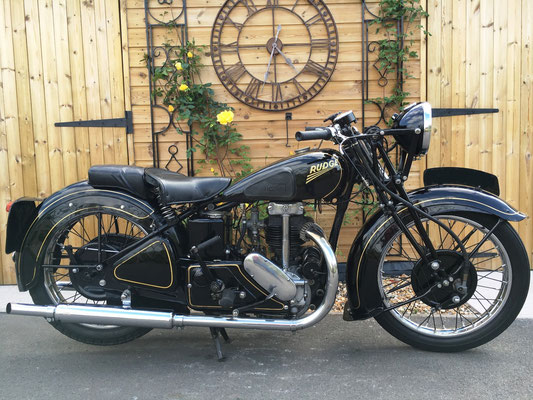 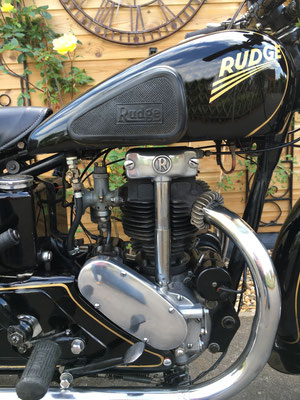 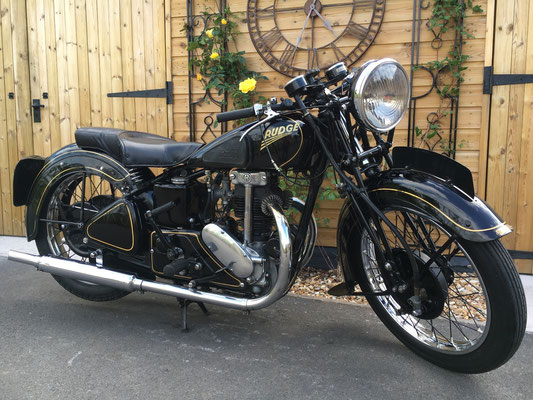 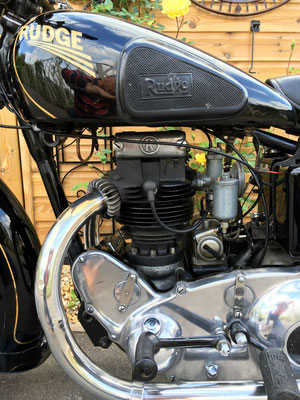 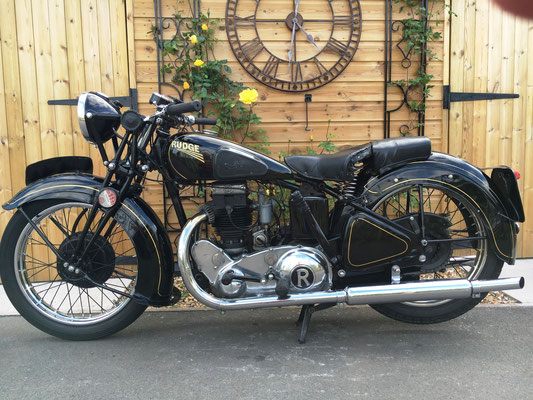 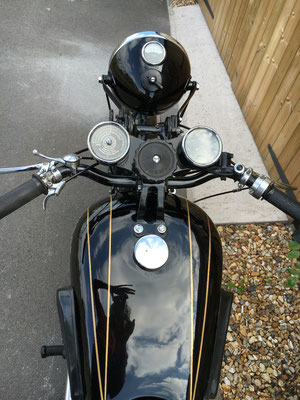 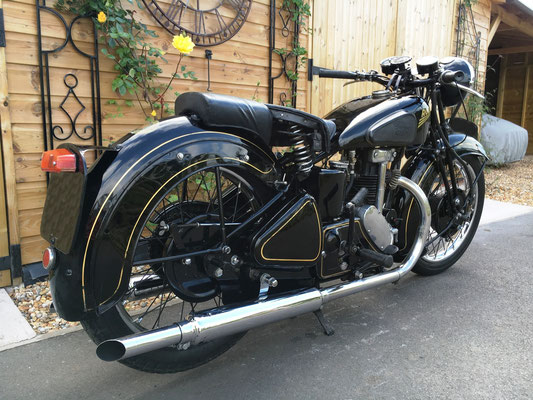 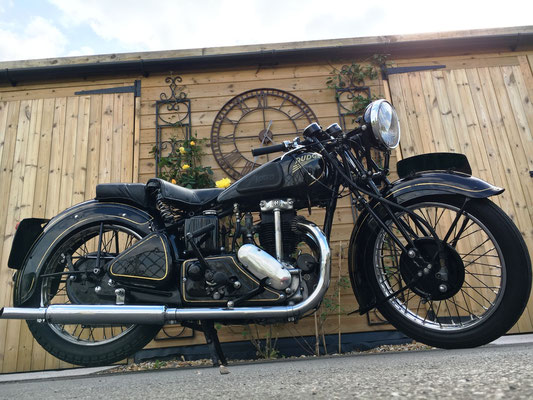 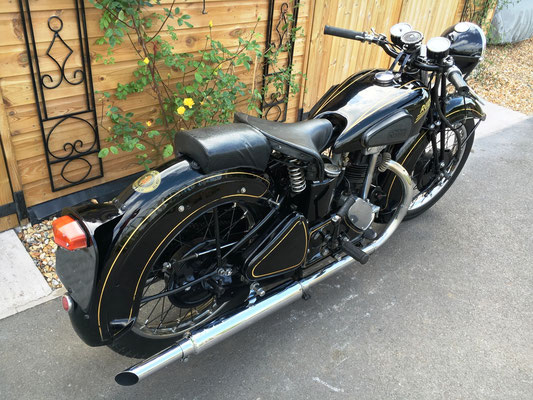 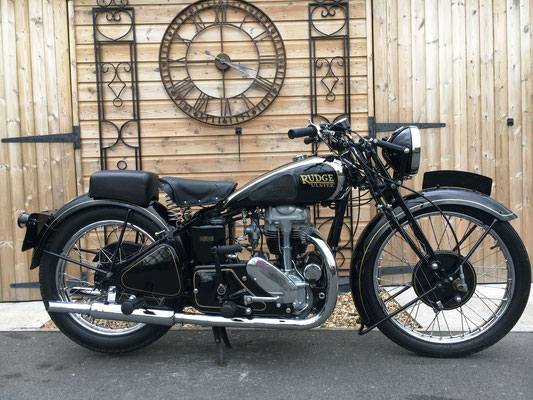 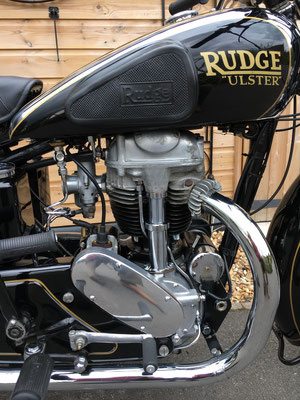 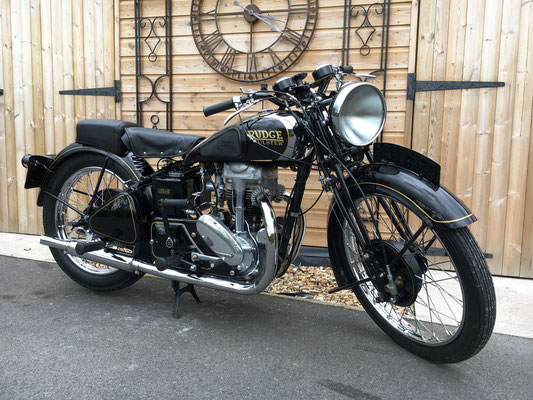 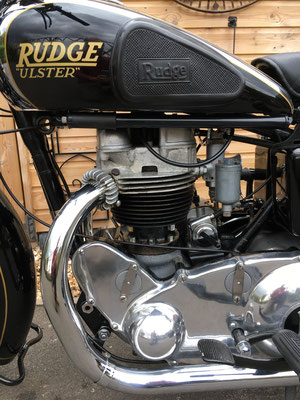 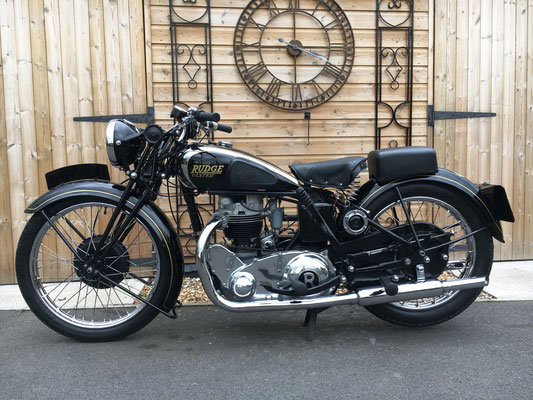 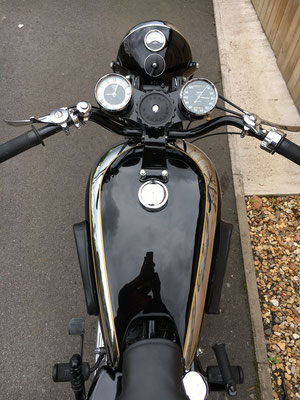 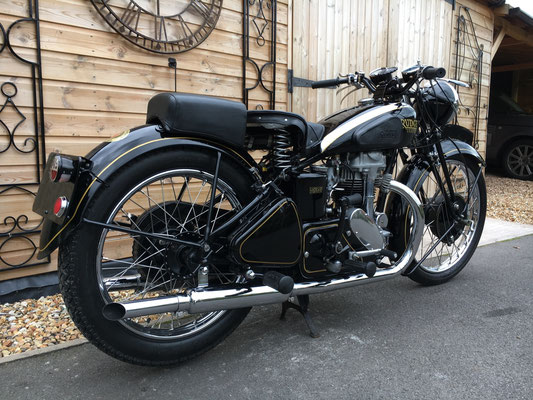 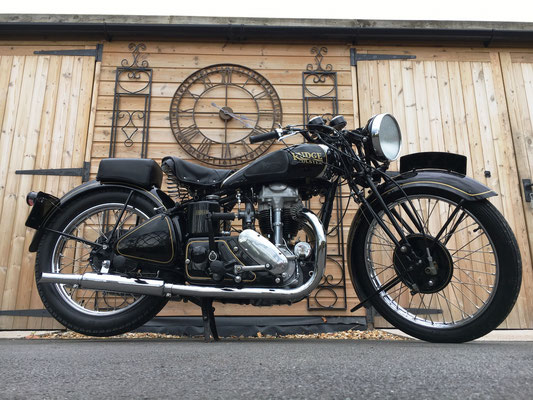 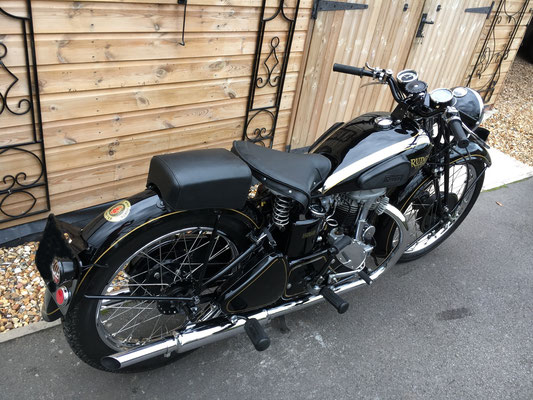 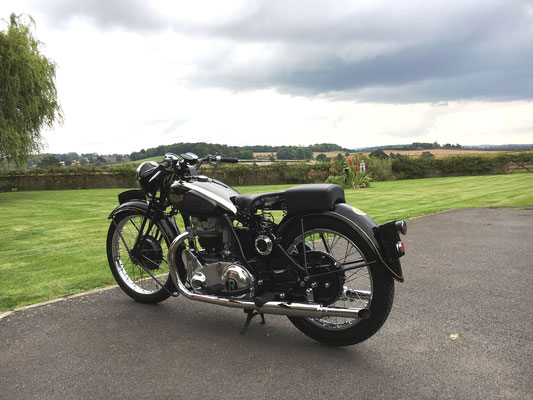 Many thanks for getting  in touch . Please leave your comments and feedback by signing my Guestbook.